“This is a great showcase of our brand.
It really is superb – Thank you“

We had the pleasure of working with award winning design practice Someone. The brief was to produce a brand film for renowned currency information service Xe. It was an exciting project that complimented our creative and technical skills. Working closely with the agency we crafted the script, edited and directed the film. We also took care of the VFX and motion graphics based on the brand assets created by the agency. Below we discuss some of the processes and creative decisions we made.

As part of the Xe rebrand, designers at Someone created a visual brand property, aptly named ‘The Journey’. It represents the flow of people, money and information across the globe. One of our challenges was to take it from print to animation. Joe Fellows, Founder of Make Productions explains, “Firstly we had to decide what the behaviour of the lines and dots would be when animated. Then we built it using various techniques and plugins in Adobe After Effects such as Particular, Stardust and Boa but none were giving us the control and freedom we needed, so we decided to rebuild the pattern from scratch in Cinema 4D as this would give us the best result”. 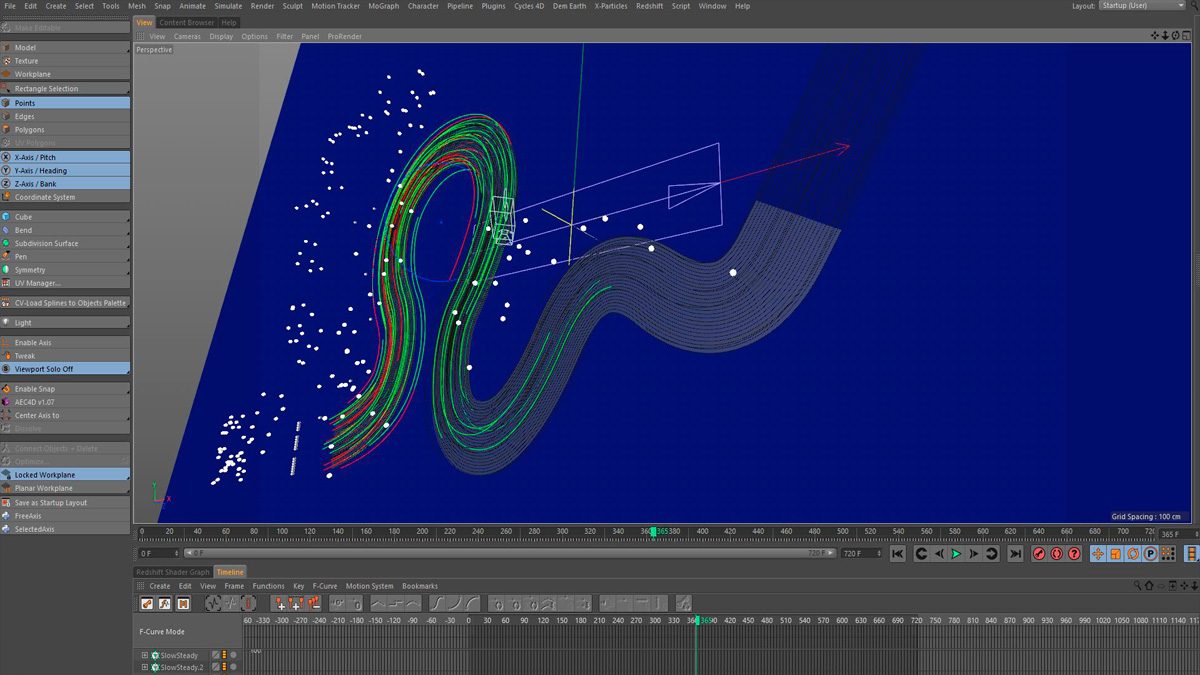 Chris Cousins, lead 3D animator on this project, talks about the process in Cinema4D, “As for the setup – I sent the little particles on tracks around the main curve, like horses on a racetrack but where they each had to stay in their own lane. One tricky part was keeping the dots always in front of the trails, but allowing some randomness in depth. The solution was to have the points of light sitting above the trails they were leaving, then using a non-perspective camera so they seemed to line up exactly. It’s like attaching a light onto the end of a pencil, then looking directly down the pencil as it traces out the line – it gives the illusion that the line follows the light. Smoothing the curves was all about fixing the interpolation, making sure there were enough points and they were in the right places.”

The animation was rendered out in greyscale with an alpha channel to be colourised in After Effects using CC Toner and later composited into various graphical elements and live action shots.

Once we had the edit signed off by the client we began the process of embedding the animation into the live action shots. Joe Fellows explains, “Matching the camera movement is vital when trying to embed elements into live action shot, so this meant firstly tracking or stabilising the shots. We used Mocha Pro to do the tracking, stabilising and rotoscoping.  Using the ‘roto’ masks created in Mocha Pro we created travelling mattes in After Effects. We would improve the mattes by adding high contrast mattes pulled from the original shots, including elements such as earrings and hair”. Below is a screen capture of the masks in Mocha Pro we used to rotoscope.

Some of the shots needed background replacement. Using the mattes we were able to isolate the foreground subjects. Then using a combination of Mocha Pro, Adobe Photoshop and After Effects we could remove or replace background elements to help improve the shots and help the graphics stand out more. In the shot below we removed a plant and shelving directly behind the subject. 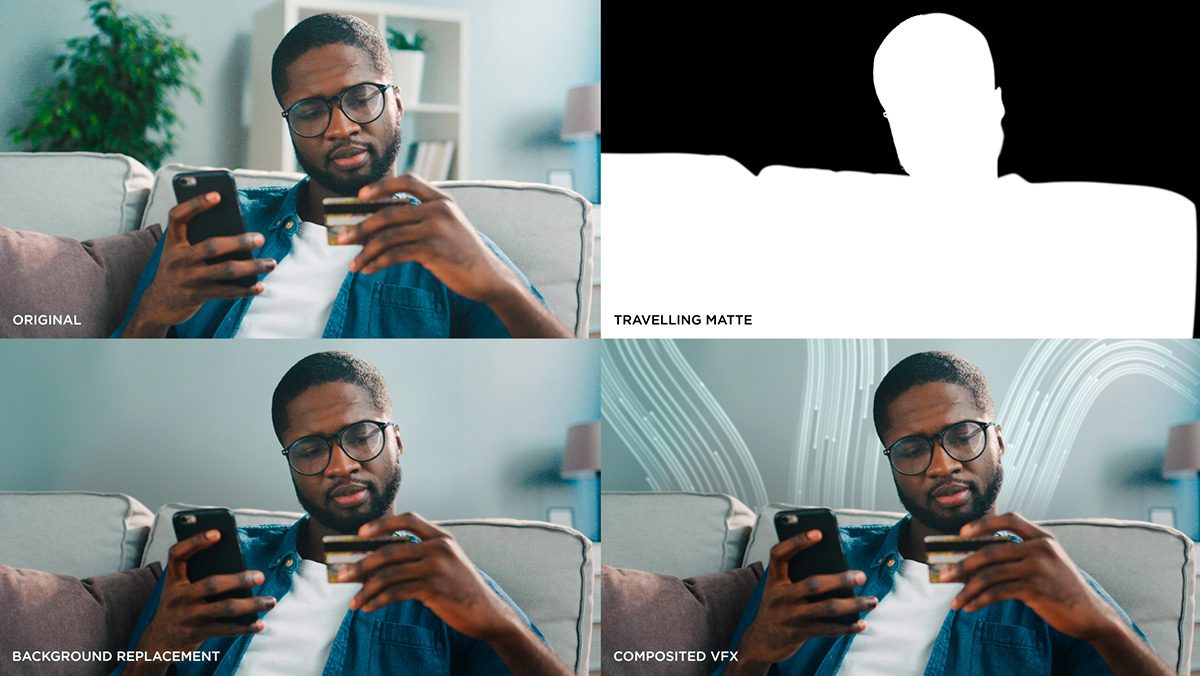 For the shot of the business woman we needed to remove the buildings right of frame to create a more open feel so that the graphics could clearly be seen. Once the shot was tracked and mattes were created we positioned the graphics and applied a depth of field effect to help bed it into the shot. 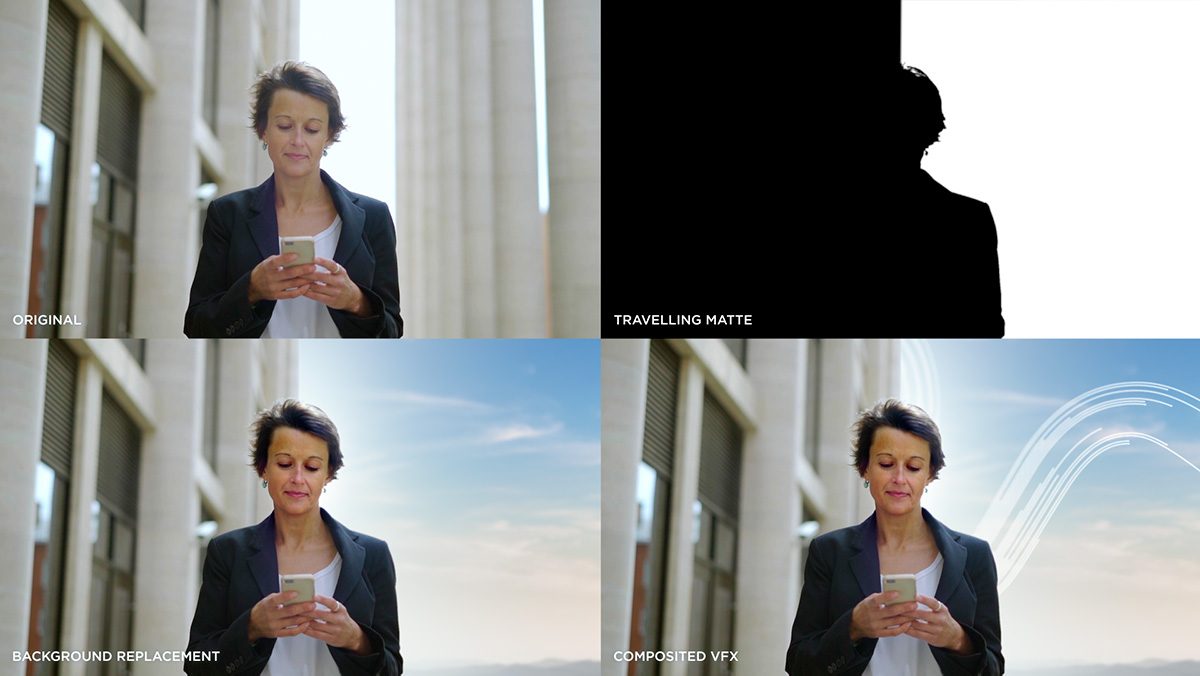 The end result is a fluid sequence of VFX shots with the Xe Journey flowing around various people as they use the Xe website and app on various devices. The imagery chimes perfectly with the brief which was to emotionally connect Xe globally with it’s consumer and corporate customers as well as uniting it’s colleagues.

This required a shot of a nerdy clerk in a run down bureau de change, but we were unable to find what we needed in stock footage. Using a combination of stock imagery and photoshop we created the shot ourselves. Luckily we found the perfect looking clerk as a still image and using our expertise in 2.5D parallax animation were able to build a ‘live action’ shot with the feeling of depth.

We built the shot using a 2.5D set to create the depth we needed for a subtle dolly camera move. The effect is achieved by layering the different elements in Z space or in 3D space, we also put a subtle moving reflection into the glass using displacement maps and masks.

Our last design challenge was animating another important brand asset, ‘The Focus’. This graphical device needed to seamlessly transition between key words and messages in the script. We went through numerous iterations before reaching the preferred animation below. The film has been very well received by the end client Xe and the agency Someone and we are thoroughly pleased too.

“Joe and the guys at Make really helped bring our brand work with Xe to life.
Easy to work with, super organised and jam-packed with ideas.
They Make a great job greater!”